Five years ago, Wave Books, a Seattle-based poetry publisher, got its start. Launching a poetry-only publishing house was a leap of faith, says Wave Books editor Joshua Beckman, powered by a lot of untested ideas: "We had more ideas than we knew what to do with," he recalls.

Richard Hugo House has a whole lotta stuff going on for Poetry month. Including some YouTube videos of poems read aloud in public spaces. Check them out here.

OMG: watching this video made my blood go cold. You think the rushing water has peaked in its rise, and then it keeps coming, it keeps coming. The stuff of nightmares.

from Seattle's The Stranger:

Meanwhile, have you been paying attention to Obama's bracket? He correctly predicted 29 of the first round's 32 games, despite three major upsets. He called Morehead State beating Louisville. All the basketball analysts got that wrong in their brackets. All the ESPN commentators got that wrong in their brackets. Morehead State's coach probably got that one wrong in his bracket. Which leads to a serious question: How much basketball is the president watching? Is he jumping between briefings on Libya and the Pitt-Butler game? Is he getting real-time updates on Duke-Michigan while Timothy Geithner drones on about credit default swaps? Is anyone clear about what our government's intel is being used for? I picture CIA operatives in black suits and black shades, sitting in on college practices throughout the country, looking for tournament sleepers. Leon Panetta, in a small gym in Richmond, lifts his wrist to his mouth. "VCU is looking promising this year. Pencil them in for a run to the Sweet Sixteen. Over and out, Mr. President..." FRANK BASQUIAT

HAHAHA . But seriously, how much basketball *is* the president watching?

World Poetry Day was March 21. How did I miss this?

THE United Nations Educational, Scientific, and Cultural Organization (UNESCO) in 1999, designated March 21 each year to be observed as World Poetry Day. The first World Poetry Day was held on March 21, 2000.

Since 2000, World Poetry Day has provided the needed venue to express appreciation and support for poets and poetry around the globe. Representatives of government agencies, educators, community groups, and poetry enthusiasts work and gather together on this day to promote the teaching, reading, writing, and publishing of poetry. Their activities include introducing young children to poetry and taking up lessons related to poetry in classrooms; inviting poets to read and share their works with audiences at book stores, cafés, and university and school forums; mounting exhibits and holding poetry evenings to showcase the work of various poets; and organizing poetry writing contests.

Ah well. At least we had a delightful poetry group meeting the next evening, March 22. Great poems all around, gales of laughter, glasses of wine, fresh flowers, and good cheer. I LOVE our group!

This sounds fun; I hear there are still some open spots:

Study Poetry, Letterpress Printing and Binding with J.W. Marshall and Jules Remedios Faye (starts April 4, and meet Mondays from 6:30 to 9:30 pm; $495.)
Join beloved local poet J.W. (John) Marshall of Open Books and legendary letterpress printer Jules Remedios Faye for an inspirational writing, printing, and book binding class in the School of Visual Concepts’ letterpress studio. John will lead students through the creative writing process, focusing on use of the image in short poetry or prose pieces appropriately sized for in-class letter press printing. Jules will instruct students in the magic of printing and hand-binding. The end result will be a collaborative limited-edition hand-printed, hand-bound book which includes a piece by each student.

Here’s what John has to say about the class: “There is a wonderful bit of education to be had when a person type-sets a poem they've written. That tactile relationship to the chosen word really provides an uncommon perspective. Plus I've taken a couple of printing classes from Jules and promise that she is an amazing teacher, printer, and person.” Registration info

PAC TEN CHAMPIONS! This was a great game. GO HUSKIES!

Thank you to Verse Daily for featuring my poem "Magnolia Blossom" yesterday. It was a delightful surprise! (And thanks again to the folks at Crab Creek Review for first publishing it). 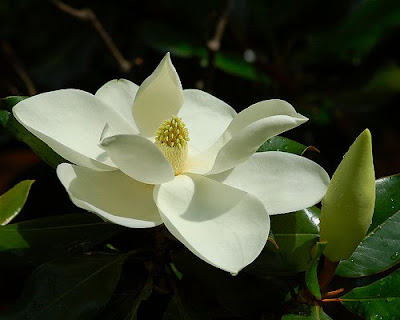 The earthquake in Japan was so devastating. Thank god it seems not as many lives have been lost as in the Indonesia quake a few years ago. Now the Republicans want to defund the Pacific Tsunami Warning System? Penny wise and pound foolish, if you ask me.

This just in: CD Wright wins NBCC award in poetry for her book length poetry documentary One With Others. Yay for her! Yay for Copper Canyon!
Posted by Peter at 7:14 PM No comments: 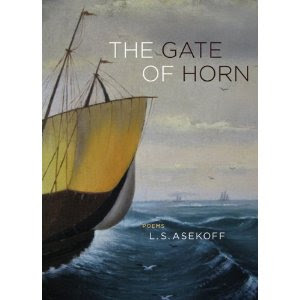 The Gate of Horn, the third book by L. S. Asekoff is his first book in quite a while (his first two were published in 1994, and 1997), so I did not know much about this poet. But what a fascinating and bewildering read! These poems are jam-packed with original and wide-ranging language and ideas. Just take the poem "Farrago: an Aria." You can hear it read in its entirety on Penn Sound, where Asekoff mentions by way of introduction that the poem began as an opera for four voices, and eventually became a monologue for one voice, a diva, who either lives in Fargo, ND, or at the Dakota in NY. Here is a brief excerpt:

. . .
Herr Doktor Doppler,
whether you blew my mind or read my mind,
as the wave collapsed back upon itself
I knew I was a victim of these beautiful misreadings —
"rain on silver stilts," "Adam's myth," "the mishearing of sheep in Australia,"
the true cauchemar on the aubergine couch.
Psychoanalysis, the Baron hissed,
the shameful spectacle of a child abusing its parents!
Yet who does not want reparations for his childhood?
O, shadow of melancholy in the garden,
as the illusory arrow speeds backward toward its naked singularity,
Mira, the Wonder Star, signals from the tail of the Whale!
. . .
(pg 22) 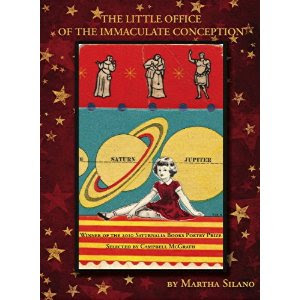 The Little Office of the Immaculate Conception is also Martha Silano's third book and, like Asekoff, she has a brilliant mind, and a pretty incredible gift for language and imagery. These poems blend cosmology, nature, motherhood, marriage, and cooking, all into a rich soup. Or is it a gravy? Read this book, and you will understand what I mean (what Silano means) about the gravy:

" . . . glutinous gravy an iridescent and variably pulsing gravy
the gravy of implosion a dying-that-births-duodenums gravy

in the gleaming Viking range
of the stars" 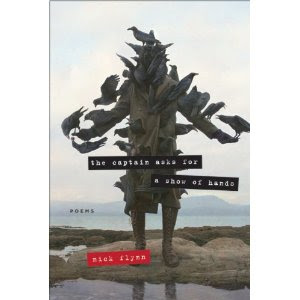 The Captain Asks for a Show of Hands is Nick Flynn's third book of poems (hmmm, all third books so far?). The cover is an arresting image of a man standing on a beach, covered with crows (counting crows?). The poems blend images from the poet's personal life, the literary cannon and pop music, with recent world news, particularly the war in Iraq and the torturing of political prisoners at Abu Ghraib. They are fairly spare, with lots of white space, and some occasional great lines, such as "We created a wasteland . . ./& called it peace." But the overall effect is a little thin. For instance, the long poem "Seven Testimonies (redacted)" uses erasure for its technique, but the result is much less interesting than the original testimonies (printed in the back of the book for easy comparison) they are taken from. I wasn't sure if perhaps the poem ends up diminishing the prisoners' lived experience, and becomes a kind of artful misappropriation? Hmmmm. 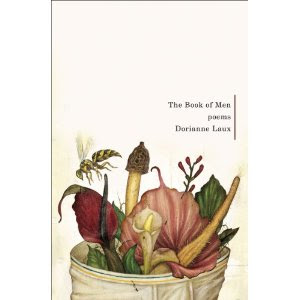 The Book of Men, Dorrianne Laux. I have always been a fan of Dorriane Laux and her new book (with its erotic images of flowers coming out of a pair of men's underpants) is a delight. The poems are her usual long single-stanza narratives, with great imagery, arresting language, and her characteristic rough and tumble attitude. She has poems to rock stars (Cher, Mick Jagger, Bob Dylan, the Beatles), poems to past boyfriends, to a foster child-friend who shot himself in the foot, to Phil Levine, to Superman. One of the interesting things was a set of three of the poems that had a form where each line ended with the same word/sound. Here is one of them (which you can hear her read over at Cortland Review):

The first of us must have looked up at the night agog,
so many stars, so much light falling down, the bugs
back then big as fists, so many rivers and ponds clogged
with fish we skewered them on sticks, made a fire, bred dogs
from wolves to keep us warm, safe, pines wrapped in fog
or morning mist, the sheep braying beside us, groggy,
their bellies filled with wet grass, the feral pigs become hogs
in a pen, cloven hooves slathered in mud. We built jagged
fences to keep what we didn't want out, what we did, in, logs
were dragged through a field by horses, a house rose, mugs
placed on a shelf, a table set with plates. Then the nagging
began: Who left the feedbag in the rain? Who forgot to plug
the hole with a rag? The children grew, little quagmires
we sank into. We fed them, scrubbed them, raised them, rang
a bell for supper, school, for the one who died, the soggy
earth taking her back, the others running unaware, tagging
each other in the dusk, calling out numbers. But still the vague
unrest in the dark looking up at the moon, the old dog wagging
his flea laden tail, barking for no reason they could tell, zagging
off like an uncle drunk on busthead whiskey, back into the trees. 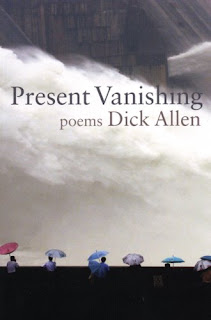 Present Vanishing, by Dick Allen. I picked this book up off the shelf at Elliott Bay and was intrigued by the long poem "American Buddhism," especially the opening section "Five Household Statues of Buddha." And I was not disappointed. This is a wonderful mature collection, with poems about home life, relationships, gardening, politics and society, the Vietnam War (I think the poet is a vet), aging and the passage of time, and the wonderful poem near the end of the collection, "So, What Did You Do With Your Life?" Read more about it at Sarabande's website.

happy reading!
Posted by Peter at 2:57 PM No comments:

Talk about wild joy. Watch this, and listen to the folks in the background re-winding it over and over again, it'll make you laugh till you cry:

Memphis dance team member Marina Barrett is becoming an internet celebrity for her wild celebration after the Memphis Pom Squad won at the 2011 UDA College Nationals.

(now imagine she's a poet, just getting a first poem, or book accepted)
Posted by Peter at 2:18 PM No comments: