Dean and I had a lovely 3 wk break in sunny Mexico recently, and I was able to catch up on my reading. In addition to the latest Jo Nesbo "Harry Hole" crime thriller, The Phantom, several recent books of poetry caught my eye:

Touch, by Henri Cole.  The book has three sections, and the poems are mostly all loose sonnets (14 lines, but no rhyme scheme or strict meter). The first section's poems explore his mother's death, and are incredibly moving and poignant, without being maudlin. The second is a mishmash of poems, some regarding photographs, paintings, some regarding recent current events, wars, casualties, as well as observations of the natural world. The third section was the most memorable for me -- intense, erotic, painful, arresting, violent and sad poems about a failed relationship, with a lover who was a drug addict. Here is a taste:

Thrown on the carpet with your legs awry --
broken, scalped, microwaved -- a receptacle
of love, you make me think the soul is larger
than the body. He lay like that the last time
I saw him, inhaling powder through a straw.
Studies show monkeys prefer it to food
in their cages; this happens even when the monkeys
are starving. "You are all darkness," he used to say,
"and I am light." Though I understood this alertness
as compassion, it wasn't. // It's March now;
the light is brittle, hard, frozen.
Experience seems to come from a distance.
Waiting for spring thaw, I throw you
in a box with the others.

Nocturnes of the Brothel of Ruin, Patrick Donnelly.  I loved Patrick's first book, The Charge, and this book seems a fitting next step in his work. It is a mix of translations of Japanese classical poems (done with his partner/husband Stephen Miller), as well as more narrative poems that expand on themes from The Charge. These are hard-earned poems about memory, confronting mortality, living with AIDS, dealing with the body's limits, and ultimately survival:

. . . But because a bitter powder
burns my blood sweet every day,
the weird wages of sin in my case
has been life, unprepared-for life,
a stumbling-block for the makers
of sermons because the punishment
we expected never came. Instead

some harsh mercy
(cunning, intricate) emptied
my tomb, prolongs
my days, swells
my account, wreathes
my neck, anoints
my feet, fattens me
on sweetmeats, publishes
my words, magnifies
my bed and husbands it
into outrageous flower.

*
The Middle Ages, Roger Fanning.  The author's note states that this is "an unusual book in that the poems written before the author's break with reality are markedly different from those written after . . . see if you can tell which poems are which." And certainly, there are poems that are more sedate and formal, and then, wow-- poems that really are a roller coaster ride, much looser in form and content, and, frankly, more fun. I assume the later came after the break?  Who knows.

The Selvage, Linda Gregerson.  Ekphrasis seems to be trending lately. I especially enjoyed the series "From the Life of St. Peter."

Theophobia, Bruce Beasley.  Dense, word-rich, musical poems exploring scripture and language and the idea of God (or fear of God, as the case may be). Even includes a bit of science, which I like ("Genomic Vanitas").
*
Happy reading!!
Posted by Peter at 9:58 AM 1 comment:

For You & Everything Alive Inside of You: Readings by Copper Canyon Press Poets James Arthur, Mattew Dickman, Ed Skoog and Friends

Who am I writing for?
For you and everything alive inside of you.
-Vicente Aleixandre
Translated from the Spanish by Lewis Hyde

The right poem makes us feel alive and, as Vicente Aleixandre suggests, written-for. Join Copper Canyon Press and Richard Hugo House for a celebration of the gift that is given between the poem and the poetry reader.

Meet author James Arthur, who will be reading from his debut book of poetry. Hear him describe the path his poems took from his feet to your ears, as well as CCP poets Matthew Dickman and Ed Skoog. Listen to local poets and performers interpret great works by Copper Canyon poets including June Jordan, Hayden Carruth and Dean Young. Allow us to introduce you to books of poetry you may not have heard of, or reintroduce you to poets you'd at one time rejected as not your type. Let us play matchmaker as you search for the poem that will light you up, or the collection that will make the perfect gift for the reader on your list.
To commemorate the 40th Anniversary of Copper Canyon Press, the first 100 RSVPs will receive a complimentary book of poetry at the door, and all guests will receive a special gift.
About the event
7-8 p.m. Meet the press. Doors and bar open. Receive your special gift at the door, and join us and Copper Canyon Press poets and Richard Hugo House staff for cocktails and hors d'oeuvres. Chat with Copper Canyon Press staff and friends, bid on poetry-related auction items, and browse our holiday book sale before the crowd arrives.
8-9 p.m. Meet the poems. Copper Canyon author James Arthur will read excerpts from his new book, "Charms Against Lightning." Local poets Ed Skoog, Matthew Dickman, and special guests including Amber Flame, Arlene Kim and Elissa Washuta will pay tribute to Copper Canyon authors past and present. After the reading, staff will play matchmaker, taking requests from those who seek a particular kind of poetry book; we'll pull just the right volume for your personal collection or for someone on your holiday list.
9-10 p.m. Everything alive inside of you: Copper Canyon celebrates 40 dynamic years, and you help us kick-start our shared future in publishing. Stick around to talk with each other about what poetry means to you and how it betters your life. Describe the poem you wish someone would write. Sit and read a while. Fill up on hope. Get a book signed. Get a book gift-wrapped. Raise your glass to another good year in poetry.
Posted by Peter at 9:44 AM No comments:

I love living in Southeast Seattle -- diversity, community, eclectic restaurants, light rail -- It's getting better all the time.

Going to the Chapel? 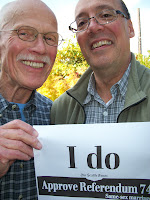 Today, December 6th, is the first day same sex marriage licenses can be granted in Washington state! By coincidence, it also happens to be Dean's and my 26th anniversary.  We are in Mexico at the moment, so will have to celebrate from afar this very big step (one of many to come) in the expansion of human rights and social justice. Plus it is just so romantic, isn't it.

see article and pics at link below (I love what Dow Constantine had to say):

SEATTLE (AP) — Two by two, dozens of same-sex couples obtained their marriage licenses in Washington state early Thursday, just hours after Gov. Chris Gregoire signed a law legalizing gay marriage.
King County, the state’s biggest county, opened the doors to its auditor’s office in Seattle just after midnight PST to start distributing marriage licenses. But hundreds of people had lined up hours earlier, snaking around the downtown Seattle building on a chilly December night.
“We knew it was going to happen, but it’s still surreal,” said Amanda Dollente, who along with her partner, Kelly Middleton, began standing in line at 4 p.m. Wednesday.
Asked whether the middle-of-the-night marriage license roll-out was necessary, King County Executive Dow Constantine said, “People who have been waiting all these years to have their rights recognized should not have to wait one minute longer.”
In Seattle, the mood was festive. Volunteers distributed roses, coffee and fruit. Couples canoodled to keep warm. Champagne was poured. Different groups of men and women serenaded the waiting line, one to the tune of “Going to the Chapel.”
“We waited a long time. We’ve been together 35 years, never thinking we’d get a legal marriage. Now I feel so joyous I can’t hardly stand it,” said 85-year-old Pete-e Petersen, who with her partner, 77-year-old Jane Abbott Lighty, were the first to get a license.