Dean and I have been enjoying the new season of True Blood. I suppose you could think of it as a more "mature" version of Twilight. Vampires, Werewolves, and the Humans who love them.

The latest episodes have been terrific.
Sookie is a Fairy?! I never saw that coming!

Missed this live, looks like it was a hoot. Glee, Project Runway, Dancing with the Stars, Betty White, Lost, Mad Men, everybody has a cameo.

Had a great time in PT with the writing group. Good poems all around, salmon bisque for lunch, an hilarious word game led by George (who knew a Hootchie MAMA cold be so fun?). I only wish the sun had come out. This has got to be the most bizarre summer I have ever seen. The weather has been so cool. Kathryn's witchhazel is already setting flowers. It thinks it is next Spring. 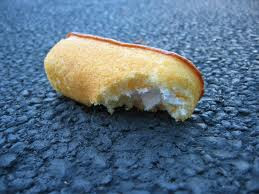 This looks like an interesting photo exhibit: a guy took a photo of each of the 37 "or so" ingredients in a Twinkie. Each one was posed on its own clear glass petrie dish. Does looking at these make you hungry for a Twinkie? Or just simply mild-to-moderately nauseated?

Just finished reading The Girl With the Dragon Tattoo (on Kindle for iPad), and I have to say I just LOVED IT! I realize I am probably the last person in America to read it -- but what a sophisticated page turner. Enough plots and characters for ten books. And the character of Lisbeth is just so endearing. How can you not just love her? I hear Daniel Craig might play Blomkvist in the American version of the movie. Perfect.. I can hardly wait to see all his naughty bits!

I have already ordered the second book. Wheee!

This is TOO FUNNY! Thanks to KT for the link.

A sweet-sad poem from Peter Everwine, from a recent ALP article in the Lake County News. It really fits this year's Northwest summer, where the rains and mists have been everpresent, and fall seems to be coming early.

Toward evening, as the light failed
and the pear tree at my window darkened,
I put down my book and stood at the open door,
the first raindrops gusting in the eaves,
a smell of wet clay in the wind.
Sixty years ago, lying beside my father,
half asleep, on a bed of pine boughs as rain
drummed against our tent, I heard
for the first time a loon’s sudden wail
drifting across that remote lake—
a loneliness like no other,
though what I heard as inconsolable
may have been only the sound of something
untamed and nameless
singing itself to the wilderness around it
and to us until we slept. And thinking of my father
and of good companions gone
into oblivion, I heard the steady sound of rain
and the soft lapping of water, and did not know
whether it was grief or joy or something other
that surged against my heart
and held me listening there so long and late. 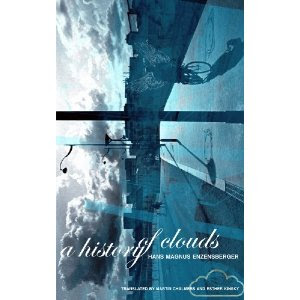 I have been reading A History of Clouds by Hans Magnus Enzeberger (translated from the German by Martin Chalmers and Esther Kinsky). I picked it up off the poetry table at Elliott Bay the other day. It has a gorgeous cover, a photo collage of a street scene with buildings and clouds, and a bicyclist with angel's wings. I liked the first few poems I opened, so bought it, and it has been quite a delight to read. I don't know if it is just this poet, or if it is a particularly German sensibility, but I love how these poems are so philosophical, how they ask deep questions, yet still keep a sense of the joy and absurdity and sacredness of life.

The title poem is a long sequence,ostensibly about clouds, but really about the ineffable, the spiritual, life after death, etc etc.

"Appearing as they do,
overnight, or out of the blue,
they can hardly be considered
as being born.
Passing away imperceptibly
they have no notion of dying.
And anyway, nobody
can match their transience. (from part one)

I love the poem "The Instruments," about medical instruments, and the doctors who use them, perhaps at times too coolly. And the poem "An Earth-Coloured Ditty," in which every other line ends with the word "potato," is beautifully done:

Another poem about death, etc. —
certainly, but what about the potato?
For obvious reasons it's not mentioned
by Horace or Homer, the potato.
But what about Rilke and Mallarme?
Did it not speak to them, the potato?
Do too few words rhyme
with it, the earth-coloured potato?
It's not too concerned with heaven.
It waits patiently, the potato,
until we drag it out into the light
and throw it onto the fire. The potato
doesn't mind, but it could be
that it's too hot for poets, the potato?
Well, so we'll wait a little while
until we eat it, the potato,
sing about it then forget it again.

Just finished a week of on call. Driving back and forth between hospital and clinic and home, I kept hearing this hypnotic song on the radio — a dreamy woman's voice singing "eight six six oh, eight six six oh." I thought it was a secret keyboard or cellphone text message to a friend or lover, but the letters didn't add up to anything. I googled and came up with nothing. Finally one day, when the announcer said it was a new song by MIA, I found it.