all I can say is wow: 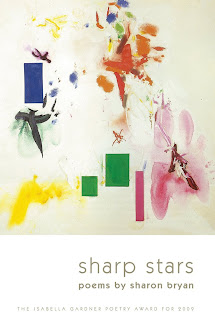 A wonderful event at Open Books last night, with Sharon Bryan reading from her new book, Sharp Stars, published by BOA. She was a teacher of mine in undergraduate days, and it was so good to see her again. Her poems have such a wonderful balance between thought and feeling, and I love the humor that permeates the poems in the new book. Even though they are exploring themes of loss and death, the end of the world, the end of the stars, they leave you smiling.

They grow up together
but they aren't even fraternal

twins, they quarrel a lot
about where to go and what

to do, the body complains
about having to carry

the soul everywhere as if
it were some helpless cripple,

and the soul snipes that it can go
places the body never dreamed of,

then they quarrel over which one of them
does the dreaming, but the truth is,

they can't live without each other and
they both know it, anima, animosity,

sings at the top of its lungs, laughs
at its little jokes, it would like

when it sneaks back home before
the sun comes up, and when the body

says where have you been, the soul
says, with a smirk, I was at the end

of my tether, and it was, like a diver
on the ocean floor or an astronaut

admiring the view from outside
the mother ship, and like them

it would be lost without its air
supply and protective clothing,

the body knows that and begins
to hum, I get along without you

very well, and the soul says, Listen
to that, you can't sing worth a lick

without me, they'll go on bickering
like this until death do them part—

and then, even if the soul seems to float
above the body for a moment,

like a flame above a candle, pinch
the wick and it disappears.
Posted by Peter at 3:25 PM 2 comments:

Pig Year of the Tiger Horoscope (this is interesting . . .)

This Year of the Tiger will bring pleasant surprises for you, Pig. Tiger years symbolize new beginnings for Pigs, and you could change jobs, homes or both. While these are beneficial transitions, be wary of entering into binding contracts with such a trusting nature. Lots of new people will also enter your life this year, and most will be good and trustworthy -- yet be on the lookout for opportunists who have ulterior motives.
Posted by Peter at 6:17 PM 1 comment: 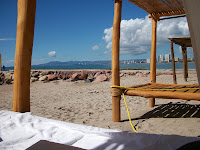 Having a super-relaxed time in Puerto Vallarta. I've read three poetry books and three novels so far, sitting in our cabana on the beach. Actually, one of the "novels" was a David Sedaris essay/story collection, Naked, which just had me is stitches and laughing like a fool, making some of the other beachgoers look at me like I was a lunatic. Yesterday I finished The Road. It was a little odd coming after the very funny Sedaris book to read something so dark and harrowing and apocalyptic. But it was riveting. I could not put it down. And the irony was not lost on me: that I was sitting in a lovely cabana at this beautiful resort beach, reading and sipping a margarita and nibbling chicken quesadilla with guacamole and pico de gallo, while all the while this poor man and his son are trudging through a burnt-out wasteland, shivering through rain and snow with their feet wrapped in rags, scavenging for food and shelter, while hiding out from bands of cannibals. 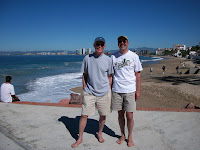 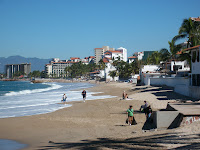 Only two more full days left. I can't imagine returning to work yet. But I know it will be fine. It always is.
Posted by Peter at 7:42 AM No comments:

I read this in a review at Poetry Daily. It is probably the most acurate desciption of John Ashbery's poetry that I have ever seen, anywhere. I am going to have to check out this essay collection:

'To read this kind of thing [Ashbery's poetry] can be intermittently stimulating; to read it at great length, as one is generally made to do in any volume of Ashbery's, is mildly masochistic'; 'This is not nonsense as a computer spewing out words is nonsense; it is, rather, an evasion of sense'; and 'His verse is less like an eruption of necessary speech than an adjustment of the poet's mind to a certain frequency, whose signal is then transcribed voluminously.'
Posted by Peter at 4:00 PM No comments:

Good news for DA Powell. I think his book is so deserving of this. And I enjoyed the Beth Bachman book as well. Kudos to both.

An established San Francisco-area poet and an emerging colleague in Nashville have been named the latest winners of the lucrative Kingsley and Kate Tufts Poetry Awards.

D.A. Powell has won the $100,000 Kingsley Tufts Award for his latest collection, Chronic.

Multiple National Book Critics Circle nominee Powell, whose past works include the collections Cocktails, Lunch and Tea, also teaches at the University of San Francisco.

The Kate Tufts Discovery Award, worth $10,000, goes to Beth Bachmann for her debut book, Temper.

Bachmann, an assistant professor of English at Nashville's Vanderbilt University, said she felt "deeply honoured" by her selection.

"The award is unbelievably encouraging and extremely motivating," she said in a statement.

The two annual honours — one to recognize an outstanding collection of poetry and the other for a promising poet's first collection — are designed not only to celebrate the winners, but to "enable a poet to work on his or her craft for awhile without paying pills," according to Kate Tufts.

She created the prizes in the mid-1990s to honour the memory of her late husband, poet and fiction writer Kingsley Tufts.

The awards are based out of California's Claremont Graduate University.

San Miguel day four: it has rained rained rained all day. We took our umbrella (from the hotel) and went on a little bus ride out to La Placita, an open air market that the locals all go to: a mix of Pike Market, a Thrift Store, Goodwill, and Farmer’s Market. Piles of clothes on tables, some new, some used, some just gathered together in bundles and tied together. All sorts of fruit and veggies for sale. Also tables and tables of bootleg DVDs, CDs, electronic devices, remotes, etc. And numerous little cocinas, with old ladies making torillas, and grilling pork or chicken, and steaming corn, and etc, with bowls of salsa and guacamole sitting out on the counters. The local families were all sitting together and eating like it was a day at the fair. Because of the rain there will little tarps put up everywhere, strung over the booths. And every now and then a build up of water would spill over and make a huge splash, which nobody seemed to notice or mind.

We came back and napped at our room, then went out for a Starbucks (yes there is a Starbucks here, and it is very nice and large, and full of gringos on their laptops or talking on their cellphones, or staring cross-eyed into their ipods, just like in Seattle! Or anywhere else). Then Dean bought a San Miguel tee-shirt, and I bought a scarf (a new men's fashion accessory?). And we scoped out a new place to have dinner tonight. Maybe El Ochenta?

If it were not raining so hard, we would probably have done a daytrip to the Botanical Gardens today. But alas, it has been pouring non-stop. We leave for Puerto Vallarta tomorrow. And we should get a good week of sunny weather and the beach before we have to go home. One can only hope.

Not getting a lot of new writing done, but I have done a lot of reading, and a fair amount of revisions. And also ordering of the new manuscript. It feels good. It feels good so far. 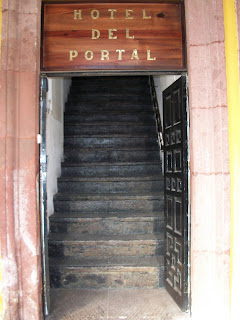 Dean and I are on the next leg of our trip, in San Miguel de Allende. What a gorgeous little city. Narrow cobblestone streets, low 1-2 storey buildings, all sorts of galleries and restaurants and little shops, wonderful homes with inner courtyards and gardens and fountains. 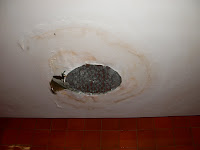 Unfortunately, we *hated* our first hotel room (Hotel Del Portal). I had reserved it online at Expedia, and it looked nothing like the ads. A narrow steep stairway to climb up with all our luggage to the tiny reception desk. Our room was cramped and weirdly laid out, and smelled of Lysol. The bathroom had an awful shower head that came right out of the ceiling and was rotting the wallboard. And there was NO WINDOW. Is it legal to have a room with no window? We were not pleased. We asked for another room, but they said there were none, so we spent most of our first day shopping for a new hotel. Unfortunately, we arrived on some special feast day weekend of sorts (Baby Jesus is presented to the temple?) and we were told by several of the places that all the city was booked. 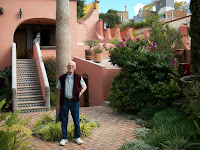 We were about to give up when we stumbled upon the Casa Rosada, not far the the Jardin Principal and the Parroquia. They had a "master suite" available. A little spendy, but it was so worth it to move out of the other awful place. We have a separate entry, lovely gardens, a sitting room, a huge bedroom and bath, and our own large deck looking over the city. And no Lysol smell! We are in heaven.

Spent much of our second day wandering the town and windowshopping. Had a great dinner at Woolis. We were going to go to a play that was showing in the local theater, but decided against it. And then, walking home there was the most incredible storm: wind, rain, hail, thunder, lightening. It seemed to just roll in over the mountains and across the valley. The roof drains were pouring into the streets, the streets were flowing with water like little rivers. It was amazing! We ducked into the entryway of a little restaurant-bar to try to wait it out, but it would not let up. So we dashed to our hotel all soaked. But it was fun!

Today, we took a lovely walk to Jaurez Park, then had lunch at this old hacienda that now houses the Hotel Nevada. The place was gorgeous, but practically deserted, so we had it to ourselves. The sun finally coming out after a cloudy morning. Ahhh . . .
Posted by Peter at 2:26 PM 2 comments: