Whoa! Hottest day ever in Seattle:

I was at work through most of it, seeing patients in relative air conditioned comfort. But driving home it hit me like a freight train. Dean and I decided to go out for dinner, rather than cook, and make the house any hotter. A nice meal at La Cocina, including ice cold margaritas. Ahhhh . . . .
Posted by Peter at 8:55 PM 3 comments: 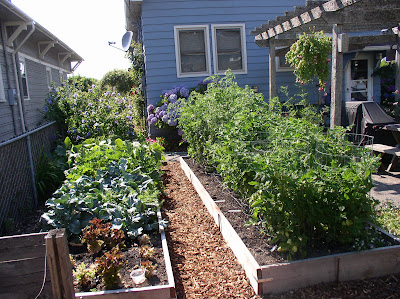 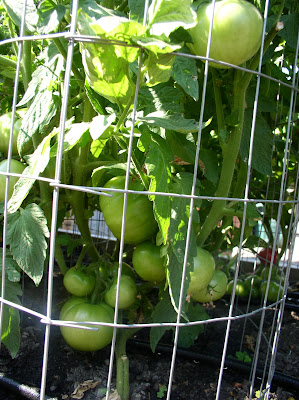 Oh my it is HOT HOT HOT in Seattle this week. The garden is just roaring. We have HUGE tomatoes! A couple of the Early Girls (or are they Better Boys?) are ripe already, and it is still only the end of July. Unheard of. And the corn! Easily as high as an elephant's eye. It's really been an amazing summer. 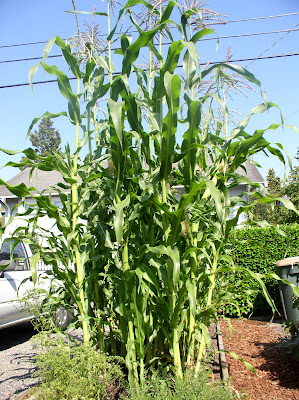 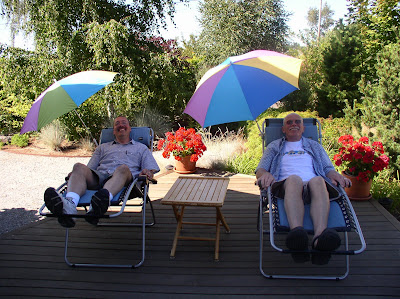 D and I are hunkered down in the basement trying to keep cool. Or, as you can see, enjoying our little "Zero-Gravity" chairs, with a slight modification: attachable beach umbrellas from Rite-Aid (only $6), to keep the sun off our faces.
Posted by Peter at 4:14 PM 2 comments:

From Lambda Literary news: this is just so sad:

With great sadness, I report that New York Times bestselling author E. Lynn Harris passed away on Thursday, July 23, while on tour for his eleventh novel.

I don't know many details yet, but it's believed it was a heart attack. I've spoken with Lisa Moore of Redbone Press and Don Weise of Alyson, both of whom knew him well, and we're all just stunned.

I worked with Lynn for over ten years as his editor and came to be his personal friend as well, so this loss strikes very close for me. Lynn had a very big heart, which he revealed in his storytelling and in his interaction with his audience. Attending a Lynn Harris reading was a family affair, and there were always flowers, tears, and loads of laughter. His novels often changed his reader's lives, and he truly was grateful for his ability to help people. I will miss him, his laughter and his big heart.

A Random House executive has confirmed to The BV Newswire that best-selling author E. Lynn Harris has died.

Harris was 54. He was currently on a book tour of the West Coast promoting his 11th novel Basketball Jones, which involved an NBA player and his gay lover.

According to Essence.com, the celebrated author's personal assistant confirmed that his health had declined but would not provide any details as to what caused his death.

Most recently, the Detroit native served as a visiting professor for the English department at the University of Arkansas.

Since bursting on the scene in the early 1990s with his seminal tome Invisible Life, Harris steadily wrote page-turner after page-turner. And his biggest fan base were women. With more than four million books in print, he originated as a self-published author -- setting the blueprint for independent authors getting picked up by major book publishers.

"I think I've been a success because I write about things I'm passionate about and have something to say," he told BlackVoices.com last year. "I think people relate to me because they know I relate to them."

A longtime author for Random House, his titles include Just As I Am, And This Too Shall Pass, Abide With Me, and his 2004 memoir 'What Becomes of The Brokenhearted.
Posted by Peter at 6:16 PM 2 comments:

I could listen to this woman's voice all day. Or at least until I fell asleep. Take a listen. I have no idea what she is talking about (it has something to do with the weather in shipping lanes in the British Isles, I think), but it is just so pleasantly hypnotic and mesmerizing, and for some reason calming and reassuring. I wonder if all the lonely seamen out there fall in love listening to her? 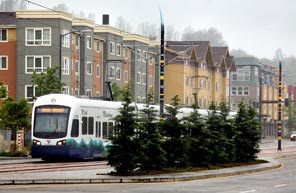 The new Light Rail system opens in Seattle today. They are expecting 50,000 riders to take a trip for free today for the grand opening.

Dean and I went down to Pike Market earlier to pick up some fish, and some extra salad makings. It was just packed! All sorts of people dressed in the same teal green shirt (for the Seattle FC soccer match against Chelsea, I suspect). Gorgeous weather, flying fish, coffee, tourists, cameras, sailboats, ferries. What a day! 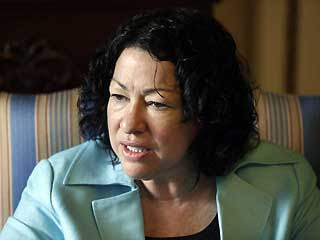 I have really enjoyed hearing bits of Sotomayor's confirmation hearings. It is such a pleasure to hear her calm, reasoned, intelligent voice. She actually knows the constitution! My favorite part was Al Franken's questions, and when he asked if the word "abortion," the word "birth control," the word "privacy" were in the constitution. The first two were easy, of course, but the third one, "privacy" she answered without a moment's hesitation (no, it does not), and then went off on a reasoned explanation about the thread of court decisions over the years that have addressed privacy. Just excellent.

Harry Potter actor Daniel Radcliffe is also a published poet?! (I love that the name of the magazine is Rubbish.)

The collection was published in November 2007 in Rubbish magazine, an annual publication with a circulation of 3,000 which describes itself as "a playful platform for fashionable people".

Introducing Radcliffe's verses, it says it is "proudly debuting the work of Jacob Gershon, 17, a very exciting and dynamic young poet".

A spokesman for the magazine said: "Poetry is a key aspect to Rubbish, so it was fantastic to be able to provide the platform for 'Jacob' and his debut work."

This was such a sweet story: Iconic Woodstock couple keeps spirit of the festival alive. They had known each other for only about 3 months at the time the original photo was taken. Now they have been together over 40 years. 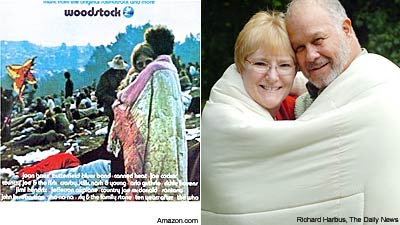 I love this poem by Sara Wainscott in the latest issue of Poetry Northwest. For some reason it just speaks to me. I have scanned it in to preserve the formatting, just click on it to view. 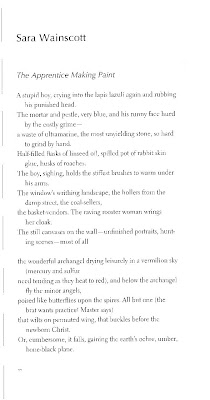 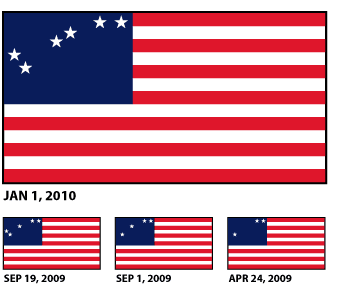 Saw this over at Emily's blog. I love the idea of a Flag for Equal Marriage. One star for each state that has joined the movement. It feels very revolutionary, very early American, very DAR. And it projects "real" American values into the faces of all the homophobes.
Posted by Peter at 8:12 AM No comments: 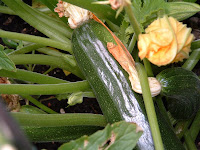 Sunday just about noon. Sitting in the cool basement. It has just been the hottest sunniest June-July that I can remember. I feel like we have already had a month of summer, and summer has really only just started. It’s really been amazing. But Dean and I have had to be particularly mindful about the garden, and keeping up on the watering. Hopefully it means we will have a bumper crop of hot weather veggies: tomatoes, peppers, cukes etc.

Speaking of which, we had such an abundance of fresh broccoli and zucchini the other day, that I tried blanching and freezing them. I found the instructions on line here: How to Freeze Summer Squash. It’s pretty easy to do: wash, cut, toss in a boiling water bath for three minutes, then an ice bath for 5 minutes (to stop the cooking process). Then let drip dry, then place on a tray to freeze before bagging in food sealer (or just put directly into food sealer). We’ll see how they are to eat later this winter, over pasta or in soup. Hopefully they will be full of summer flavor and still crisp, not mushy.

Watched poor Andy Roddick loose 16-14 in an epic 5th set to Roger Federer at Wimbledon. I am so bummed. I wanted Andy to win so bad. He only lost his serve once in the entire match, and it was in the final game. Arrrggghhh.

Watch the entire kooky rambling video here. Is she setting herself up for a 2012 presidential run, or for more Britney-esque tabloid fodder for years to come? 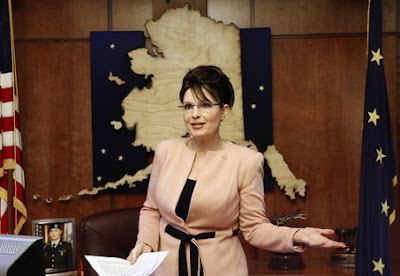 Remember this when the primaries begin: Palin is a QUITTER. She abandoned her post when the going got tough.

Email ThisBlogThis!Share to TwitterShare to FacebookShare to Pinterest
This cover image from the latest issue of Seattle's The Stranger is in such bad taste, I just love it. 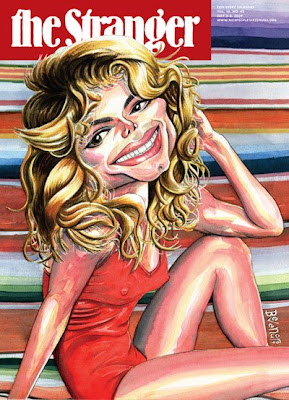